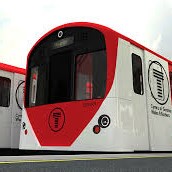 After we had succesfully won the bid I worked with the newly formed “Transport For Wales” branded franchise helped develop their operational capabilities.